The JET Programme was started in 1987 with the purpose of increasing mutual understanding between the people of Japan and the people of other nations. It aims to promote internationalisation in Japan’s local communities by helping to improve foreign language education and developing international exchange at the community level. Since its inception, the JET Programme has seen significant growth, from its original 848 participants from 4 countries in 1987, to 5,761 participants from 57 countries (as of 2019).

There are currently approximately 1000 local government organisations, including 45 prefectures and 18 designated cities which host JET participants. 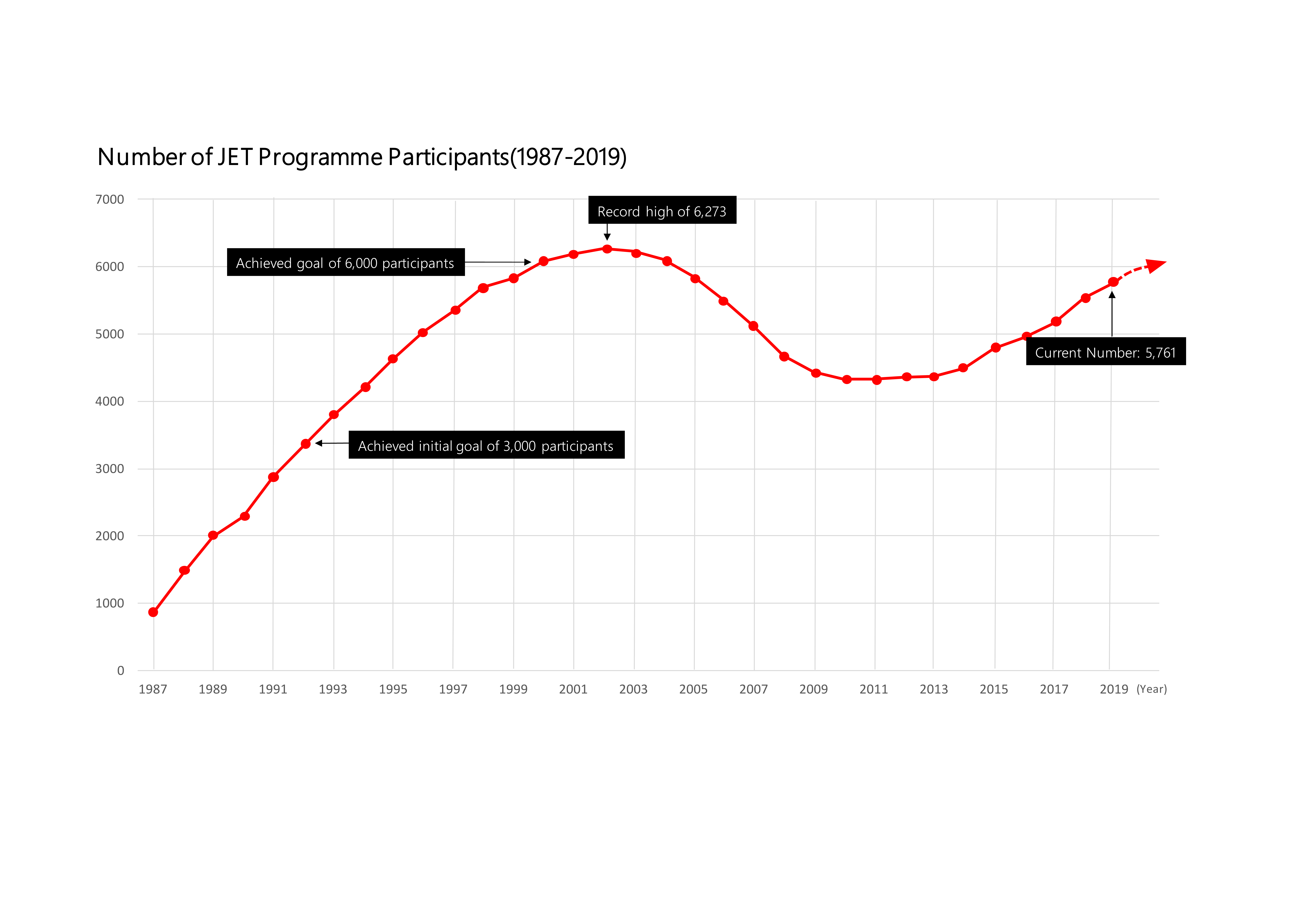 From four countries (the United States, the United Kingdom, Australia, and New Zealand), 848 people visited Japan as the first participants of the JET Programme: 35 as Coordinators for International Relations (CIR) to work in local public entities and 813 as Assistant Language Teachers (ALT) to teach at public junior and senior high schools. They attended Post-Arrival Orientation and Mid-Year Seminars

1,443 participants from six countries, newly including Canada and Ireland

1,987 participants from eight countries, newly including Germany and France (German and French included in the targeted languages); the JET Alumni Association (JETAA) was founded for former JET participants. (Initially 37 chapters → 2013: 52 chapters); started seminars for participants who choose to recontract for the following year

3,325 participants from nine countries newly including China, and the number of participants exceeded the initial target of 3,000 people; established the Counselling System Committee (CSC), comprised of three (four at present) professional counselors; dispatched Prefectural Advisers (PA) to organisations to give advice on the establishment and management of a counselling system for the JET Programme

5,332 participants from 27 countries; started the Conferences for Returning JETs; introduced the merit-rating system

6,273 participants from 40 countries (record highest); created Elementary School Specialist ALT position (20 ALTs in the first year); established the position of Specialist PA for those who have been participating in the JET Programme for more than three years; increased the upper age limit from “younger than 35″ to “younger than 40″

5,853 participants from 44 countries; included Russian in the targeted languages